The large-scale plasma setup KROT is a group of unique electrophysical and vacuum installations. The setup is used for laboratory modeling of physical phenomena in near-Earth and space plasmas, including the effects accompanying active experiments and natural high-energy events. The research and developments performed on these installations cover the following fields:

The KROT room ensures protection against ionizing radiation, which is produced by operating high-voltage and accelerating equipment. The below-ground experimental room 900 m2 in area is equipped with heating systems, draw-in and exhaust ventilation systems, 1 MW electric supply infeed, cold-water and compressed-air supply systems, four beam cranes with a load-carrying capacity of 5 tons, and a loading room.

As of now, KROT has no analogs, neither in the Russian Federation, nor in Europe. Operating competitors of KROT plasma chamber are the LAPD (Los Angeles) and SPSC (Washington, DC) that have recently been upgraded in the USA.

The plasma chamber of KROT is made of non-magnetic stainless steel, and its volume is 180 m3. Quasi-uniform gas-discharge plasma can be produced in a volume of up to 70 m3. The chamber is equipped with prevacuation and high-vacuum pumps, as well as with a system for continuous or pulsed working gas inlet (argon or helium, usually). Plasma is produced by an inductive discharge under a working-gas pressure from 10 uTorr to 10 mTorr. A system of four pulsed high-frequency generators with a total power of up to 4 MW is used for this purpose. It is possible to perform experiments both in isotropic plasmas (without an ambient magnetic field), and in plasmas magnetized by an axial field with an induction of up to 1 kG. The magnetic system of the setup is a mega-joule capacitive energy storage switched to the solenoid installed inside the plasma chamber.

The setup is unique in that it can contain plasmas of record-breaking dimensions with electron densities up to 1013 cm-3. A plasma column, which is highly uniform in three dimensions and isolated from the metal walls of the chamber, allows one to perform studies in the regime of "infinite" plasma that imitates physical conditions in space environment. A wide range of variations in the density of decaying plasma (from the maximum to zero) and the value of the magnetic field, which imitates the magnetic field of the Earth and other space objects, makes it possible to study space phenomena in both downscaled and full-scale laboratory models, including plasma tests of samples of space-borne instruments. Another aspect of the setup uniqueness is a high level of repeatability of discharge parameters (about 1%) from one "shot" to the next one, which allows accumulating a great volume of experimental data over many operation cycles. 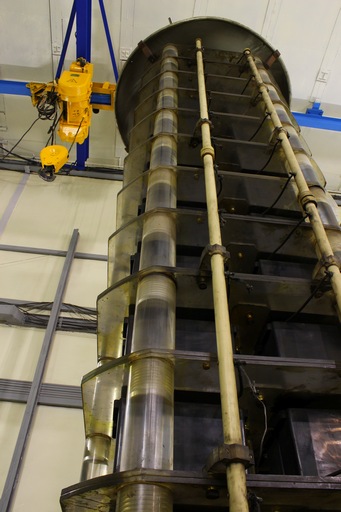 Pulsed voltage (PV) generator is based on the Arkadiev-Marx generator scheme. It is designed to produce voltages at a level of 1 MV and is a 13-storey rack, which houses high-voltage capacitors, charging resistors, dischargers, a high-voltage rectifier. The control panel is installed in a remote control room. The PV generator is designed to model physical effects that occur in the process of breakdowns in long air gaps (about 1 m long ones). The setup is used to study the dynamics of long sparks, plasma structures that are produced during breakdowns, high-energy charged particles and radiation quanta, as well as high-power electromagnetic pulses (EMPs).

The KROT-F accelerator is designed to produce pulsed electron beams with particle energies of about 1 MeV and currents of the 10 kA range. The gigawatt nanosecond high-voltage pulses, which are formed in the accelerator, can be used directly to generate ulta-wideband electromagnetic pulses with a spectrum in the frequency range from several MHz to hundreds of MHz. The electron beam is formed and transported by means of an electron-optical system based on pulsed solenoids. The accelerator beam is injected to electrodynamic systems for generation of microwave radiation in the decimeter-, centimeter-, and millimeter-wavelength bands at power levels from tens of MW to several GW. Electron beams, X-rays and millimeter waves can be used to model the influence of particle flows and high-power microwaves on the ionospheric plasma. An important applied problem solved by using the accelerator is modeling of the influence of particle beams, X-rays, and microwaves on technical objects that function under the plasma formation conditions.